“Would you kindly read my review of Bioshock?”

This game is called Bioshock.. and in the gaming community and maybe outside the community a bit, this game will be hailed for it’s refreshing of the tired FPS (first person shooter) genre, marveled upon for it’s artistic and technological glory, praised for it’s story, directing, and production, and sadly, Criticized for it’s portrayal of children and violence.

Story——— I was very intrigued by this game and the story it was going to tell, not many games catch me storywised.  It’s set in 1960.  You’re name is Jack, and your aboard a plane heading…somewhere.  You open your wallet and look at a picture of you and your mom and dad, then you look at a present they gave you before you left.  on the gift it reads “Dear Jack, Love mom and dad. P.S. would you kindly open…” (rest of card is covered by the bow) something goes wrong and the plane crashes in the middle of the atlantic ocean… right next to a lighthouse.  You enter the lighthouse to find a minisub that leads you to…”Rapture” a City built at the bottom of the ocean. The city is in ruins when you arrive, torn apart by a civil war.  You’re befriended by Altas, a man desperate to find his wife and child. your only sane connection to this chaotic world, and your only means of companionship with him is over a radio. 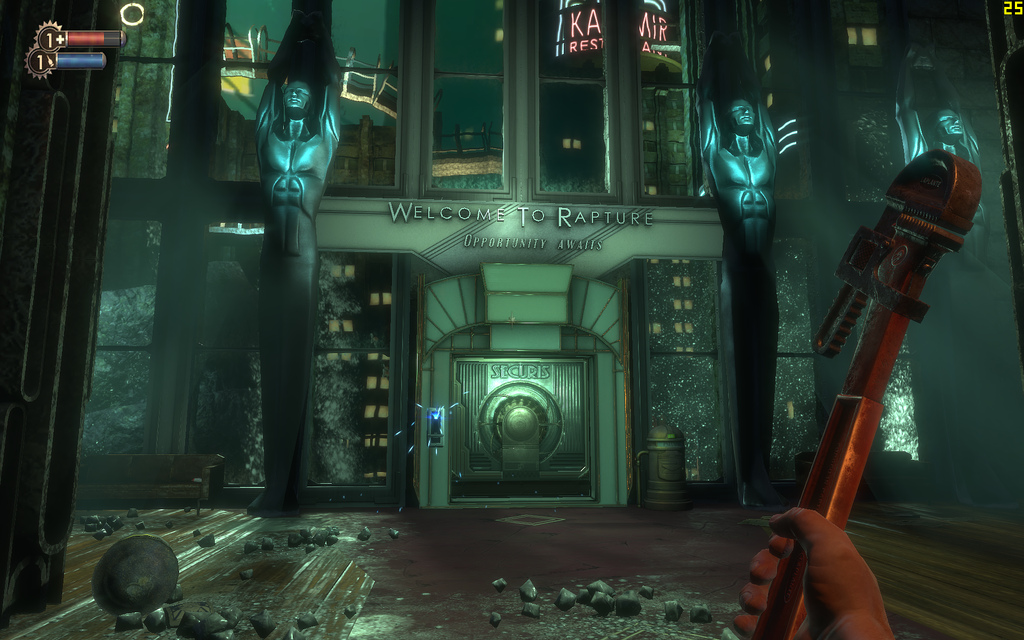 Graphics————— Simply phenomenal in every way. The very first thing that makes your jaw drop is the water effects… I sat idle in the game after the opening cut scene…because I thought it was still a cut scene.. no way did I think the water was that gorgeous in the game!.  it is.. they REALLY pushed the technology of PC’s and the 360 for this game and it pays off in large amounts. The art style is breathtaking.  very 50’s and 60’s Art deco, the atmosphere of the game never leaves you, your always reminded that this was once a beautiful, peaceful, ambicious city that has been completely ripped to shreds and is falling apart and has been this way for years, maybe longer.  mildewing and moldy carpets and wallpaper, water running in sheets down walls, air full of dust. If there is ANY game to show off your PC.. this is definately it. 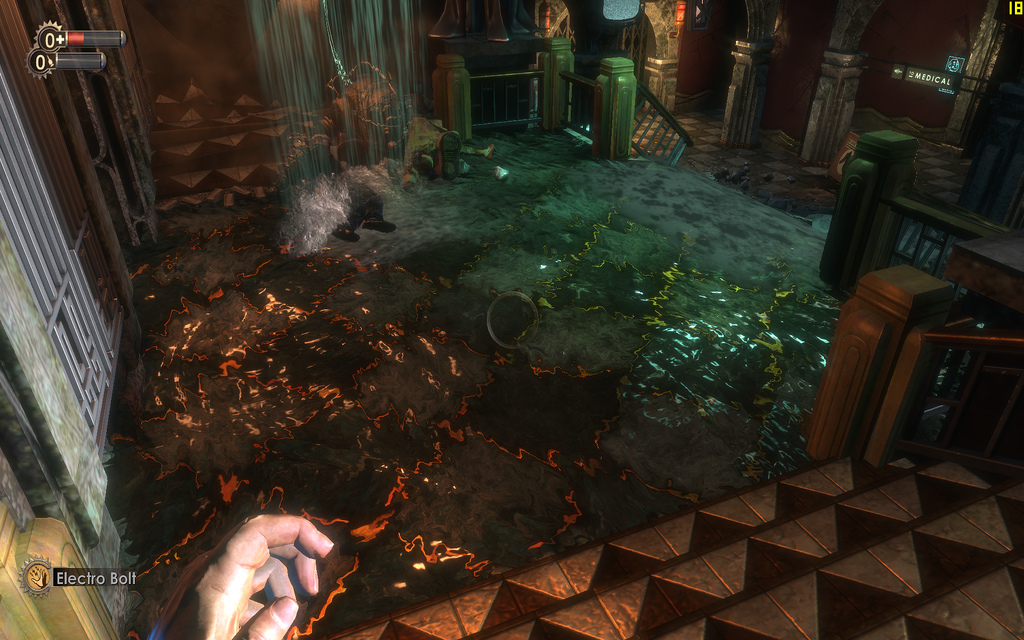 Sound—————-– Sound plays a larger roll in this game then alot of other games.. there are Soo many sounds in this game.. if you stand in any spot in the game and listen close, you’ll hear about 30 different things going on.. sea animals outside the city, water trickling in thru cracks and seams, “splicers” (main type of enemy in the game) babbling or walking around. the structure creek and whine around you, and the ever scary “Big Daddy” stomping around and moaning. (hardest enemy in the game.) mind you, this is ALL while just standing still and taking in the ambience.. also to note is the fantastically moody music in the game.  all orcestrated and written specifically for Bioshock.  the best music in games are always the ones made for the game. This ranks up there with Jesper Kyd (Wrote all music for the Hitman Quadrilogy) and Marty O’ Donnell (Halo Trilogy)

That, is a Big Daddy protecting a Little Sister… and there both scary.

Gameplay—————-– For a while, I’ve been getting tired of FPS shooters… there typically all the same, just run around and kill stuff.. it gots pretty old.  This game is pretty refeshing.  the basics are the same, you run around and shoot people.  But, there are many RPG elements to it now.  upgrading weapons, Tonics (which you hold on your persons to increase certain abilities, more fire damage, or run faster, or take less damage from enemies, hack faster, etc etc.) Plasmids, which re-write your DNA to allow some crazy stuff.. pyrotechnics, telekinesis, having a swarm of bees come out of your arms!.. crazy. and you’ll need to manage these many abilities depending on where your going and what you’ll be encountering. You can also photograph enemies to “research” them, which allows more damage, understanding what weapons work better, etc.

The controversy that the game is already gettting is a little touchy.. see.. in order to upgrade your Plasmid ability.. you need “ADAM” a mutagen cell that are carried in the bodies of “Little Sisters”.. little girls that run around, stabbing the dead, extracting there dead cells to be recycled basically.. they call the dead “Angels”.  there protected by “Big Daddy”.. a HUGE bio-mechanical creature. Well, in order to “extract” the ADAM from Little Sisters… you can either rescue them (ADAM causes them to freak out like everyone else in Ratpure).. or you can kill them and take ALL there ADAM.. rescuing only recovers a small amount. so.. yeah.

Misc. ———————-– I wanna go off a little bit about just how well the world of Bioshock is portrayed.. I don’t fall for hype, in fact, I was already panning this before it’s demo was released because it was a FPS and it didn’t look fantastic.

You’re constantly reminded that the world is still alive, that it was once a majestic getaway for the most intelligent, richest people.  while sneaking up to one of the “splicers”.. I stopped and listened to them,.. they where crying.  and mumbling about how normal they once where, and asking themselves what happened.  The “Big Daddys” in the game don’t really “die”. they come back after some time passes, but the little sisters are gone for good if you save or kill them.. so, the Big Daddy’s just waunder around like a child after it lost it’s mother in a store..kindof.. they don’t speak, just moan.  But once they lose there “Little sister” there moan changes, they move slower, and are pounding on the walls that the Little sisters crawl in and out of..looking for them.. you can tell there sad and worried about what could have happened to there Little Sisters.  you find audio tapes of the citizens just before or during the initial happenings and there filled with hope, sadness, amusing tidbits of information about just what happened.

WITH all that said… I know alot of fanboys are just juicing there sweatpants that the PS3 won’t be getting this game… maybe never (exclusivity with Microsoft) I for one.. kinda feel this is a disservice to the gaming community.  Not to gloat, or seem high and mighty.. I see games as an art form if done right.  but I know alot of gamers don’t/can’t see games in the same light. They’ll get an inflated ego over the fact there there gaming system has an exclusive that the “inferior” systems don’t have.  This is ridiculous, and this game should be put on the Ps3.  it’s a shining example and shouldn’t be held to a single system.  I know the Ps3 can run this, so it should!.  if they could get it to work on the Wii without losing alot of the graphical appeal.. they should! (doubt that one..but, we can dream.)

Anybody who enjoys gaming, great storytelling, or pretty stuff to look at.. definately should get this game..

Bioshock —————– 9.8 ++fantastic graphics, art direction, style ++Sound and Music draws you in and keeps you interested. ++Storytelling and voice work is some of the best. +Gameplay never gets dull or too repetitive =Widescreen field of view is much closer than Standard definitions, pissing off some people, I didn’t mind too much.

Well, thats all.  Catch you on the flipside.