Well, all you 3 people that read my “G.E” blogs.. Sept. 28th is kindof a sad day. on the last Friday of this month, Sega will be completely pulling the plug on there final System ever… the Dreamcast, I can hear a couple fanboys go “Goodzorz!” or whatever the hell you say while manipulating yourselves to your Playstation2’s or whatever.  While the failure rate of the ol’ Graybox is pretty non-existent.. they won’t last forever

Why did the Dreamcast fail anyways? Sega offically discontinued production of Dreamcast on January 21st 2001.  not even 2 years after it’s release on August 9th, 1999 (9.9.99) It wasn’t a catastrophic fall from grace like the Atari, Or like other consoles that had too much hype and not enough substance such as the 3DO or the Jaguar.  it was a combination of many many things.  For one, Sega had a very tarnished reputation at this point. The Sega CD had very mild success, which in the gaming industry is bad, your new system HAS to be better than the previous, it just HAS to be.  Than the release of the ill-fated 32x… Almost upon release of the 32x, Sega had pulled support for this Genesis Add-on.  It wasn’t cheap (160 bucks on release.) many of the games had bugs, glitches, and game ending errors because they where rushed to meet the holiday season. in about 6 months the console was so unwanted that it had dropped in price to under 50 bucks, came with free games and a voucher for a free game and it still remained unsold. in just under a year, Sega pulled the plug on it.  This, was the biggest punch to the Sega brand name and left a dark aura around them for years. Sega dropped the 32x so quickly to put all there support behind the Sega Saturn. Sega’s 2nd attempt at CD-based gaming.  the Saturn was a BEAST, had 2 32-bit CPU’s and could easily outpace the Playstation in terms of performance.  But it never quit did.  Saturn was historically hard to program for, and many games that where released on both the Playstation and the Saturn took an extra 3 months on average to hit the Saturn.  And many that where released didn’t quite hold up against there Playstation counterparts. This alone wouldn’t have been a big problem, but Nintendo released the 1st true 64-bit system with the Nintendo 64. Which quickly became the number 2..leaving the Saturn at a distant 3rd place in sales.  the overall design of the Saturn hurt the system too, when component prices dropped as they always do, the design of the Saturn did not allow Sega to drop the price of the system, it tried compensating by adding games to the system bundle.  which in the end didn’t work out. 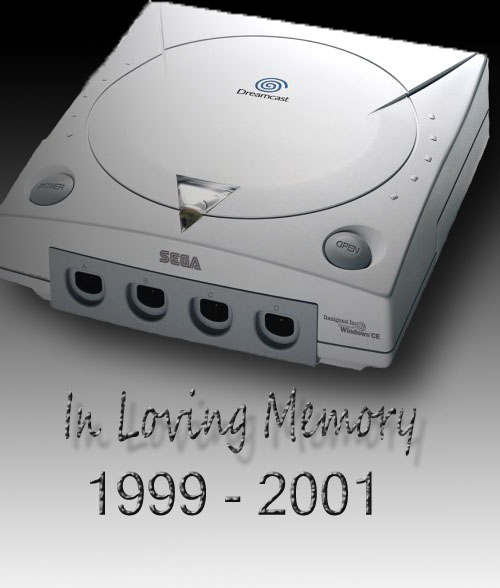 Then it all came down to the Dreamcast, Sega had high hopes for this system and threw over $100 million dollars at the advertising campaign, at that time, an unfounded amount of money for a game consoles ad funds.  they seemingly had it all. Hi-tech system, easier to program for, huge ad campaign. and when it was released, it sold HUGE amounts and did very well the rest of the year, but sales stalled, for one thing, EA was not supporting the Deamcast at ALL. This was a huge blow to the Dreamcast as EA was a big player back then for there sports games (now-a-days they are basically the ever present overlord of gaming as they release more games yearly than any other company.) Also, The dark aura that Sega left with gamers with the 32x and Saturn had not lifted, many hardcore gamers who had picked up the 32x or Saturn early on felt the Dreamcast would get the boot too soon to warrant the purchase. also the “GD-ROM” used on the System, while holding nearly double that of a normal CD, proved very easy to crack, and Games for the system where very quickly available for download.. but the Biggest nail in it’s coffin.. was the building ad campaign of the Playstation 2 in early 2000.  Many people simply waited for the Playstation 2’s release and didn’t look twice at the dream…what was it?..cast?

I believe the Dreamcast wasn’t given a fair shot at ALL.  to this day, you won’t find a better selection of 2D fighting games.  It has ALL the major fighters, and many underground favorites.  Anybody who has owned a Dreamcast will instantly tell you it’s probably there favorite, and the only ones that say “it s ucked!” have never owned one.  Peter Moore (former vice president of Sega of America, former head of Xbox 360s division and now President of EA Sports.) One of the rare CEO’s and bigwigs who tells it like it is and is looked up to by the gaming community has stated he loved working on the Dreamcast, and still loves the little Box.  And really, how can you bad mouth someone who is THIS dedicated to gaming! (yeah, there real..) The fact is, if given a proper head start and if the gaming community allowed themselves to get over Segas past, it could have flurished for years and many great games could have been seen on this thing.  But the gaming community can be very fickle and bull headed. When nintendo tried catering to all demographics back in the N64 and Gamecube days, the Hardcore gaming community still called them “For kidz”, which wasn’t true, The N64 still has one of the most offensive games to date, Conkers Bad Fur Day (re-released for the Xbox in 2005..and, ironic, censored!), and the Gamecubes “Eternal Darkenss” was a huge mindfuck.. they tried releasing games for the Hardcore and had it thrown back in there face. It’s funny, now that Nintendo has full on said “We’re for casual gamers now”… the Hardcore community calls foil and says Nintendo gave up on them.. ironic.  Nintendo is back on top of the market without us.  our own faults if you ask me.

So, There you have it, thankfully, the Dreamcast can be had for very cheap on Ebay.  I’m actually thinking about picking up another JUST as a backup for when mine eventually fails.  If anybody is at all interested in this fantastic little box that never got a fair shot, I highly recommend hitting ebay for one of these systems… a quick glances shows one for sale for only 30 bucks!. includes 8 games.