Skip to content
Another one.. I know I know. It’s my passion. I’m sorry. Wait. No I’m not. Fuk you if you don’t like it!Anyways. I wanna touch on spoiled gamers for a bit. First. I have some news.
*sniffle*

sorry. It’s… Hard.. But. My xbox360 died just the another night. Poor thing had.. Ooh. I’m guessing over 7,000 hours of gameplay logged on it. Definitely my most played console right now. It was inevitable really. I had one of those “early adopter” models that had a failure rate of 33.3%. Meaning. One out of 3 of every xbox360’s sold from launch day to late 2006 WILL fail and stop functioning. It was a severe design flaw that, overtime, caused the graphics CPU (the GPU) to lose solder connection to the motherboard. The heat sink on this chip was not up to pair and is now costing Microsoft over 2billion to correct. Kudos to them though for not ignoring the issue. I was on the phone for about 25-30 minutes. Got a shipping label, my repair is free! So. Yay for that! And now on to my bitching!

With the close of 2008 came a pretty damned good year for gaming in general. In many.. MANY sectors of commerce came declines of revenue. We are in a recession after all. But the gaming sector saw a 15% increase in sales! This is both good. And bad news in my mind. And here is why. While people bought more games and consoles. They effectively shunned everything new. For years, gamers trolled on forums, blogged on facebook and botched at uninterested Gamestop employees about how stale the market has gotten with all these sequels! “Where are all the new games?!”. “I don’t want another call of duty or Madden!” “I like Boobies!” (ok, that last one was me..) I was one of them. I’m getting tired of sequels. I want a new IP (Intellectual Property). So this year was exciting because there where a few really good looking games that told different stories and changed up the game play and innovated there genre. There was, what seemed like, a lot of interested behind these titles. Which is why I’m both baffled and surprised none of them sold well at all!

My first title. Is Dead Space.

A horror/deep space game which lofts much of it’s story from event horizon (I rent. It’s the only W.S. Anderson movie that’s any good!). This was released by EA, they obviously had confidence in this as they released an anime movie along side it and comics to fill in gaps in the story. The game itself is very well done. While gameplay wasn’t revolutionary, it did change it up and added new things to the 3rd person genre. Sound was freaky excellent and graphics where creepy good. Art direction sickening brilliant and it was fun. Most important. It was fin and did what it set out to do. Freak you out! What are the sales figures? To date since it’s Oct 14th, 2008 release, it’s sold a disappointing 790K copies for all platforms.  There not great. Didn’t sell as well as EA thought it would. A little disappointing. Why? *shrug*.. I’ll get back to that.
Next up? Mirrors Edge. 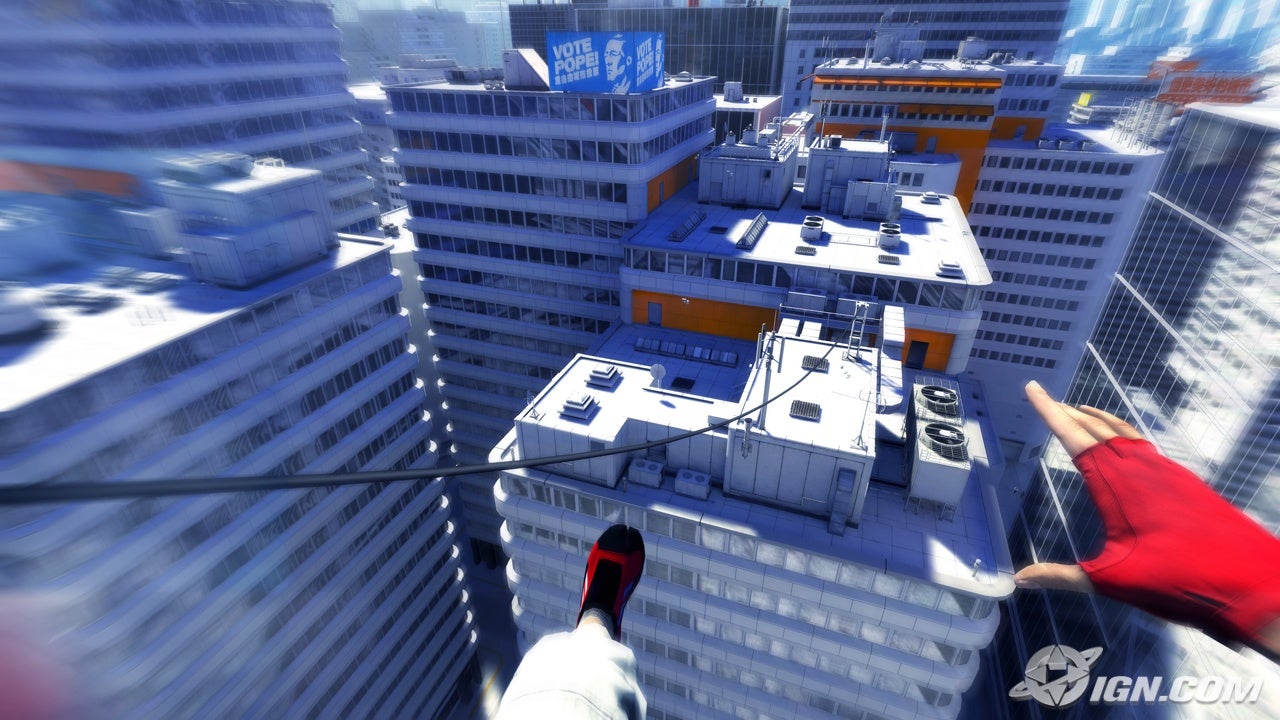 This game is about a totalitarian government that has taken control of a city, you play as Faith an underground carrier who delivers sensitive information. The story is a bit flimsy and not a lot is explained at all. But the game breaks many traditions of gaming and, right up until it’s actual release was highly anticipated because of it. But once it was released was all but forgotten by gamers. The game itself is very interesting. The art direction is beautiful with contrasting colors and stylized backdrops. The gameplay is a complete 180 for FPS games (First Person Shooter..very little emphasis on shooter.). You rarely have a gun in this game and spend much of it trying to get away from the bad guy. Which is, apparently, a big no no in gaming. You know, cause gamers like to kill and not simply survive. The challenge comes from “free running”. Fluently jumping, sliding, climbing and running along walls to escape along rooftops. I personally love this alternative style of fps and hope EA (yeah again.. Who knew?!) tries a sequel. (and here I am botching about sequels. Ha-ha). Reviews have been very polar on this game. Either being trashed or hailed. Another huge irritating mindset of gamers that really shined in this game in these 2 images

This is the cover of the box on the left, and a “fan” recreation on the right. With bigger titties with nipples. And anime style big eyes. I prefer the left. It’s a departure of tradition. The vast majority of woman in games are barely dressed, big breasted woman. Dice Studio completely flipped the script on that and made a much sportier bodied female lead. Obviously. “gamers” prefer objectionizing woman. Way to go guys. I know many of you haven’t gotten laid. But please. Get a life. Jesus. Even the Game Producer of DICE was disappointed in the “fan boys” depiction of the lead woman Faith
“
I remember when I first had that image sent to me. To be honest, I found it kind of sad. We’ve spent time in developing Faith. And the important thing for us was that she was human, that she was more real.
We really wanted to get away from the typical portrayal of women in games, that they’re all just kind of tits and ass in a steel bikini. We wanted her to look athletic and fit and strong [enough] that she could do the things that she’s doing.
We wanted her to be attractive, but we didn’t want her to be a supermodel. We wanted her to be approachable and far more real. It was just kind of depressing that someone thinks it would be better if Faith was a 12-year-old with a boob job. That was kind of what that image looked to me”
So, how did this game sell? I believe it sold worst then Dead Space did. Which again.. Is sad. To say the least. But the saddest entry in this blog? 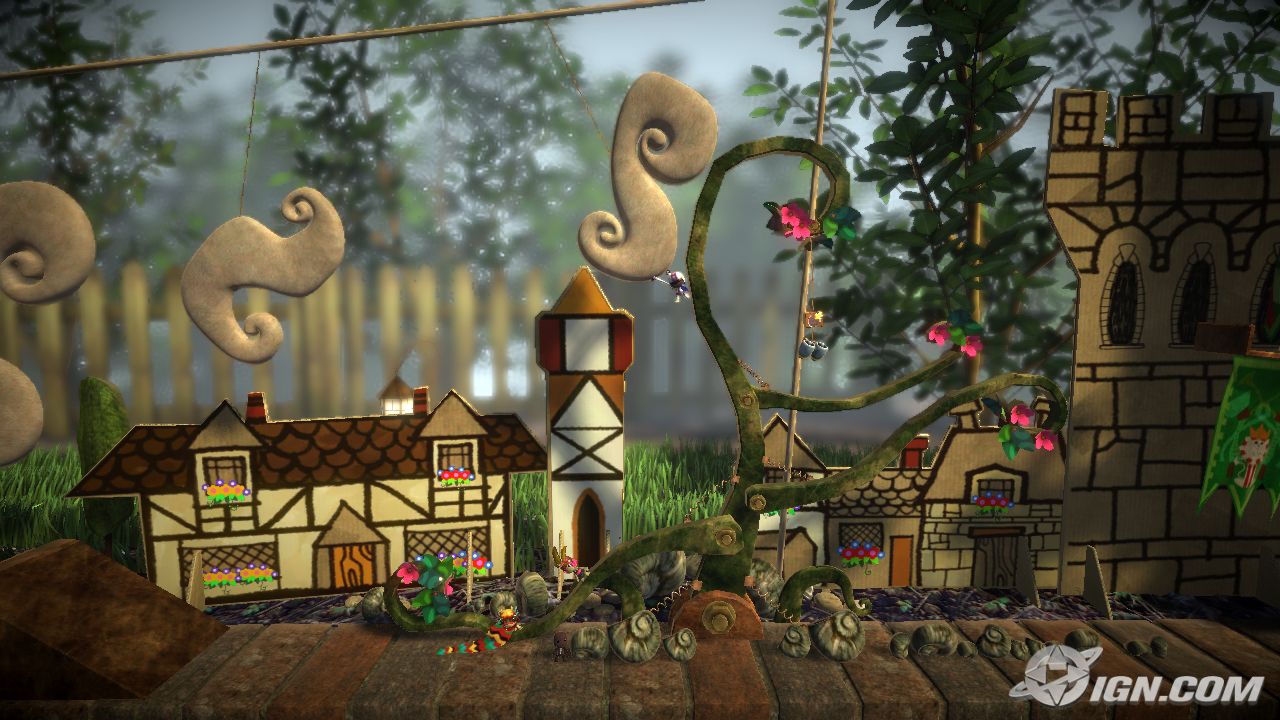 LittleBIGPlanet. This game is the biggest departure of the “norm” you will find without going Indie! With super simplistic gameplay, infinitely robust and never-ending gameplay and creation options and a community that makes homegrown and original levels that rival even the games shipped levels. This was the most original game to be released last year. No real story, but it’s just meant to be fun. And it is. Graphics are creative, cite and a joy to behold, music is catchy. Your not going to find more innovation or creativity than right here. And yet. This game sold around 1.8 Million Copies so far, that may sound like a lot.  take into consideration that the top selling game right now.. just in the month of December sold 2.2 Million copies.  a single month, this game has had almost 3 months now..
Why?I think it might be the recessions fault combined with spoiled, stubborn gamers. People spent more money this year on games than any other year. But it wasn’t on new and interesting things. Why risk getting a game you have no ideas of whether it’ll be good? You liked Call of Duty 4. So logic only permits that COD5 (has sold about 6 Million copies so far.) will be good right? Or your 7th Madden (Has sold about 7 Million worldwide.) title? Right? When your low on money but want to escape.. Your going to stick with what works. Sadly. This mindset is killing off any great game studios who innovate! Factor 5 who made Rogue Squadron and Lair (Lair innovated, but sucked at it. There is a patch that fixes it though!!) is no more. Black Box Studio is rumored to be closing. The creators of Need for Speed Underground and Skate. Many more studios are being bought up and losing staff. Here is a cry of warning. This will only create more sterile, cookie cutter, copycat games. If companies lose money being original. They’ll stop and just keep squirting out madden 87, Call of Duty 13. Etc etc. Close minded gamers hurt innovation too! Come on. Who wants to run away in a game!? Stoopedd! I wanna blow shit up and have my sidekick have big, barely covered boobies.! I know. Change is scary..
Here are some games I suggest you try out, I know it’s scary.. but please, just give them a shot.
Kane and Lynch
Clive Barkers Jericho
Beyond Good and Evil
Okami
The Sega Dreamcast (seriously, there only like 15 bucks now.. get one.)
Shadow of the Colossus
Sega Rally Revo
Give these games a shot, some of them simply sold poorly but where praised by critics, others where panned by critics and consumers alike.  but, I give you my word that they are entertaining, good games that aren’t fully appreciated.