In this review, ReverEND and I (Sufyan) will be taking a closer look at Street Fighter 4 for both mobile platforms, iOS and Android and compare some differences in the and the similarities.  So sit back and read…..DO IT!

Ah Street Fighter, one of the best arcade fighters I have EVER played.  Since I have had this game I could not put my iPhone down.

Just like a lot of games that are out for the iPhone, Street Fighter IV Volt is almost exactly like the console version.

It has 11 stages each with its own look but it does miss out on some of the stages that are on the console counterpart, like the last stage in arcade mode on the console version, You can go Head-To-Head with your rivals on Building sites, A Temple, The Training Room ETC.

There are amazing combos for you to try out with ’22’ individual character, master as many combos as possible to become UNSTOPPABLE.

Try to survive against as many foes as possible in Survival, or learn the basics in Free-Sparring.

Not only that but make your Avatar stronger to be able to make every character you use almost invincible in the ‘Wandering Warrior’ mode.  Unfortunately Wandering Warrior mode is not a playable mode, but only a customization-ish mode. Each player gets their own avatar so they can use differerent titles to increase their avatar’s skill. once the avatar is set up then you can choose a charater. you should be able to see that the character’s skills are better.

To be able to play Street Fighter IV Volt you must have the following:
-IOS must be 4.2 or better.
-can be played on iPhone 3GS and better.
-iPod 3rd gen and 4th gen (32gb and 64gb)
-it has been confirmed that the game will work on the both the latest iPads but the application is not made for them.

So what do you think of the game SufBear?:
I thinks that this game is AMAZING, After playing this game I could not put my phone down. my favorite character is Abel because unlike the rest of the roster, his special moves are grapple related and they look so awesome when you land one. When both his special or ultra are used they do serious damage.  I play this game a lot to pass time and I can seriously say that there is not a single thing wrong with it, but I have an iPhone 4 so it may be different for 3GS users. in multiplayer I still need some practice but I can get a win once or twice so I’m not a complete noob. Watch out for users that use Akuma, Ryu or Ken because its almost impossible to win against them if you prefer Abel.

How does the game look sufcheese?
On the iPhone this game has very beautiful graphics, the stages have stunning detail and the characters look great. the controls are very easy to use – an analog on the bottom left of the screen and 4 easy to use buttons on the bottom right. There is an ‘SP’ buitton for special attacks (but it takes more than that to win a game against someone over wifi).
this game is around 444mb for the IOS devices. to get the full game up and running will take around about 20 mins (my WiFi is better than yours :P)

ReverEND Note: Wait, only 444mb?!.  Jesus!. my additional data to download was over 1GB!! that’s ridonkulous. 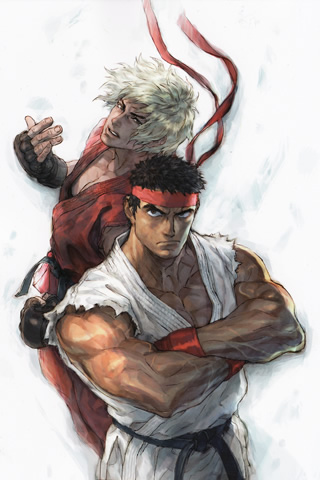 My first hiccup…and one that many Android users may be use to.. is that the game isn’t actually supported on my phone, so I couldn’t get it via the Android Marketplace… yay.  But I found a way to get it anyways. (take that Capcom!)   My second little surprise was to find out that this game takes up over 1.2gb of space on the phone!.  That isn’t a small amount for anyone counting.  While not the biggest game ever, it comes close.  Frankly, I’m perplexed why it takes up that much.  Upon booting up the actual game (after it’s downloaded it’s resource files which can take a few hours if not on wifi.)  it’s pretty typical, pick your game mode, character, “style” any assists that you think you need.  once your actually in the game is where you notice things.

The in game controls for the android are… usable.  it was harder than I would have liked to pull off special moves, even with the dedicated “SP” and Guard button.  (thank you jesus for the dedicated Guard button though.)  it was all the directional pad.  not having tactile feedback wasn’t easy for me to get use to and still doesn’t feel nature.  beating the game with a couple guys never alleviated that feeling either, I’m not going to knock the game for this too severely because it’s not Capcoms fault everything is touchscreen based now.

For one, all backgrounds, like their console counterparts are 3D rendered, but none of the characters are, if you look close, you will notice they are all pre-rendered animations.  I honestly don’t know what to think about this.  I mean, wouldn’t having them be scripted 3D rendering take up way less space? meaning it wouldn’t need a huge download? Yes, but it’s far easier for a lesser smartphone to do a pre-rendered animation than not.  So this is the first trade off we see.. and if this wasn’t the so called “HD” version I wouldn’t have dinged it for that, but this is specifically an “HD” copy which indicates that it’s meant for higher up phones… which should be able to handle any GPU based rendering the game requires.

The game sounds a lot like the console versions, lower bitrate and quality for obvious reasons, but I coudn’t tell that any actual signature sounds were missing, background stage music sounds shorter and loops sooner if you pay attention to it and there isn’t any diversity to the sounds that are being made.  The Console versions have multiple, slightly different sounding audio cues when you are hit, throwing a punch, doing a special move, etc.  I couldn’t really tell that there were any different sounding “sounds” (if that makes any sense) for each attack I was doing or each hit that I was taking.  Not a huge deal, and again, it’s understandable as they wouldn’t want to make the download even BIGGER!